The Tabris.js CLI is a small tool to help you with common Tabris.js development tasks. It provides a convenient interface replacing the multiple tools which had to be used before (generator-tabris-js and yeoman for project creation, http-server for serving apps and cordova to build, sign and deploy apps).

To install the Tabris.js CLI, run:

Note: you need to have the Node environment installed.

Create a Tabris.js app in no time

After answering a few questions, a simple Tabris.js project will be created in your current directory.

To see your new app running on a mobile device, follow these simple steps:

On your development machine execute:

This starts an HTTP server serving code and other resource of your app to connected devices.
The address of the server will be output to the console:

Then start the Tabris.js developer app on your mobile device and connect it to this URL to see your app in action.

Note: you may need to transpile your code before serving it if using TypeScript or ES6.

No more fiddling with cordova and having to learn how to work with its parameters. Execute:

Cordova is now a local dependency of Tabris.js CLI, so you won’t need to take care of installing the right Cordova CLI version to make the build work.

Running an app on an emulator or a device

Apps can be deployed to a connected device by running:

In case no device is connected, the app will be deployed to an emulator.

Note: for iOS builds, signing credentials and the --device flag have to be given to deploy the app to a connected device. See the Tabris.js CLI documentation for more information about code signing and the tabris run command.

It doesn’t matter if you build locally or using the build service at https://tabrisjs.com. Tabris.js CLI is used for all Tabris.js builds starting from 2.0.0. This makes tracking down issues locally much easier.

Excited? So we are!

Tabris.js 2.0 will be released on July 18th. Make sure to check it out! In case you want to try out Tabris.js CLI now, you can install the latest version compatible with Tabris.js 2.0.0-rc2:

The Tabris CLI is just one of the cool new additions to Tabris.js 2. Don’t forget to check out the other top 10 features in the rundown below. 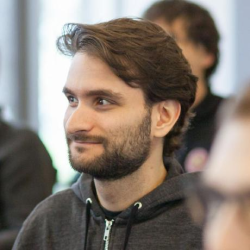 Christian Petrov
Christian is a working student at EclipseSource. He has worked on several Tabris.js apps, and has contributed to the Tabris.js framework development since its inception.

He holds a Bachelor's degree from the Baden-Württemberg Cooperative State University (acquired in cooperation with EclipseSource as a corporate partner) and is working on his Master's degree in Informatics (Karlsruhe Institute of Technology).